Once you recognize the warning signs of potential abuse, its important to intervene and protect someone from harm.

Here are 4 ways to step in and disrupt sexual violence:

Direct Intervention - Goal: Directly confront the situation with the people who are involved.  Confront the Aggressor or Perpetrator and call out the harmful words/actions/behavior toward their target. Let them know that their behavior will not be tolerated and they may face serious consequences for their actions.  Talk to the Target about what they have experienced/are experiencing, let them know that you believe them and support them and will help them get to safety.

Cause a Distraction - Goal: Create a break in the harmful behavior to give the Target space to get away from the Aggressor/Perpetrator.  Make a loud noise, engage the target/aggressor in a random conversation, cause a theatrical scene to divert attention and separate the victim from the perpetrator.

Delay Intervention - Goal: Wait to intervene until you know what type of intervention to do, or until it is safer for you intervene.  Document the incident with photo/video to use as evidence after an incident has occurred.

How to Support a Survivor
Survivor Resources
Enter text 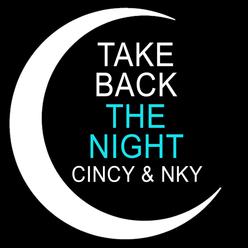 How to Intervene to Stop or Prevent Violence

Take Back the Night
Cincinnati + Northern Kentucky
View on Mobile